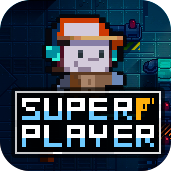 SuperPlayer is based on the block chain game "Krypton Knight", focusing on "asset characteristics", "rich game content", "healthy economic system", to explore the new business model of the game. The game Super Player is a decentralized MMO game running on the chain. Not only can you become an explorer, but you can also team up with other players to explore mysterious relics and experience the joys of exploration and teamwork. You can also become a gladiator to have real-time duel with other players in the arena, experience the excitement and refreshment of the battlefield, become the game's "number one player". You can also become a businessman, provide a variety of supplies for other players, and become a "millionaire" of the game. You can also become a city owner, build your own empire, participate in Imperial wars, and become the king of the world. In a word, where there are people, there are fights!